You are using an outdated browser. Please upgrade your browser to improve your experience and security.
Home Resources Hub Resistant net blotch, Episode II: “Attack of the Clones”
Go back

We’ve known for a couple of years that hybrids of net form and spot form exist in nature. But now, not only do we know they exist, they exist with multiple genetic mutations that make them more resistant to Group 3 fungicides, and they are all genetically identical. Author: Megan Jones Feb 17, 2020 Read Time: 4 minutes

Do you remember feeling let down when you first saw Star Wars Episode I, The Phantom Menace? Then, Episode II Attack of the Clones came out, and you thought surely this would be better than Episode I. Surely! But it wasn’t.

Net blotch on barley has also let us down, with Episode II recently released from CCDM laboratories, with help from DPIRD WA and USQ’s Centre for Crop Health. Here’s a recap of the episodes:

Episode I: Net blotches – both spot and net form net blotch – have been identified as resistant to some Group 3 (azole or demethylase inhibitor) fungicides in WA.

Episode II: A hybrid version of net form and spot form net blotch with more resistance to DMI fungicides has been discovered. And it’s a clone! (ie. it’s been spreading itself asexually around WA).

A hybrid clone? That’s right. We’ve known for a couple of years that hybrids of net form and spot form exist in nature. But now, not only do we know they exist, but they exist with multiple genetic mutations that make them more resistant to Group 3 fungicides, and they are all genetically identical.

So now we’ve got to work out a way to win the clone war.

Hybrids that are more resistant

In 2017, CCDM researchers Fran Lopez Ruiz and Wesley Mair got a call from DPIRD telling them there was an outbreak of spot form of net blotch (SFNB) on a barley crop in the Southern end of the WA Wheatbelt that was out of control.

After multiple applications with different Group 3 fungicides, this barley crop was still covered in SFNB as seen in the below photo:

And, according to Wes, this is what has been taking over crops in Southern WA in the 2017-2018 seasons.

The research team also found that hybrid strains from seven sites across the South Stirlings, Frankland, Amelup and Esperance regions were all genetically exactly the same.

“After adapting well to its conditions (ie. becoming highly resistant), it has been reproducing asexually to spread itself across the southern areas.”

How we can win the Clone War

Here’s the silver lining. Genetically speaking, we now know exactly what we are dealing with.

So what can we do?

According to Fran, we must stop selecting for it.

“We know the hybrid is quite virulent on Oxford, as most of the hybrid clones we have collected so far have come from infected Oxford samples. We’re looking into Planet (PBR) and La Trobe (PBR) too, as these are the only two other varieties where we have found these highly resistant strains, albeit at far lower frequencies,” he said.

“With improved knowledge of host sensitivity, it may be possible for growers to select varieties of low sensitivity, which could lead to a reduction in the population of the hybrid and slow its spread. However, we can’t rule out the possibility that it can adapt, so we need to keep tabs on it.”

Fran said propiconazole and tebuconazole are among the Group 3 compounds most compromised by these mutations so their use should be avoided, whereas the efficacies of epoxiconazole and prothioconazole were less affected.

“Other fungicide modes of action, such as those from Group 11 (QoIs) and Group 7 (SDHIs), should be in the mix too, as they still remain effective at controlling these hybrids,” he said.

Fran said it was important growers also keep an eye on net form net blotch (NFNB), as a new genotype of this disease was recently discovered in South Australia showing dual resistance to both a SDHI fungicide as well as some DMI fungicides.

For more information on the discovery check out the GRDC media release here. If you suspect fungicide resistance in your paddock we would love to hear from you. Please contact the CCDM and let us know – frg@curtin.edu.au or ccdm@curtin.edu.au

About Wes and Fran

Fran has been studying fungicide resistance since 2002 and completed his PhD jointly at University of Malaga (Spain) and The John Innes Centre (UK) in 2010. He is now a theme leader at the CCDM, leading projects relating to fungicide resistance management and disease impacts. 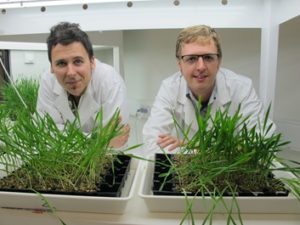