You are using an outdated browser. Please upgrade your browser to improve your experience and security.
Home Resources Hub Plant-pathogen intrigue drives research interest
Go back

A keen interest in plant-bacteria interactions in the rhizosphere and the role of plasmids was kindled in Kealan Hassett when completing his undergraduate studies in molecular genetics and biotechnology at Western Australia’s Curtin University. Author: GRDC Dec 08, 2021 Read Time: 2 minutes

Although he was city born and bred, Mr Hassett’s interest in plants had been fostered by his horticulturalist father. He is now set to contribute to the scientific understanding of a significant Australian barley disease.

He became interested in his area of study after attending an honours expo in the final year of his undergraduate degree. The expo presented the opportunity to undertake a proteomics project on the “weird and wonderful” world of plant-pathogen interactions with the university’s Centre for Crop and Disease Management (CCDM).

“After completing my honours in 2018 and publishing the results in late 2019, I volunteered as a research assistant within the CCDM labs. In the meantime, another project opportunity arose in late 2019. This new project was in the form of a GRDC-supported PhD looking at the population structure and virulence of spot form of net blotch of barleywithin Australia, which I commenced in early 2020.

“This project was more in line with my undergraduate degree and was of interest to me as I have previously enjoyed learning about population genetics.” 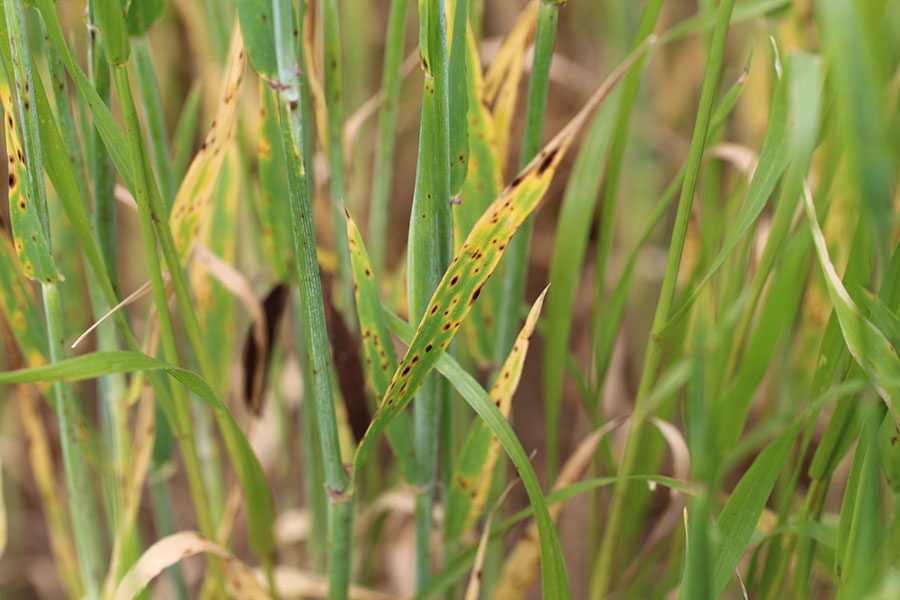 About spot form of net blotch

Spot form of net blotch is a major foliar disease of barley worldwide. It is caused by the fungus Pyrenophora teres f. maculata (Ptm). Knowledge of the pathogen’s genetic diversity and population structure is critical to better understand the disease’s evolutionary capacity and the development of sustainable disease management strategies.

“For my PhD project, we assembled a collection of 269 Ptm isolates together with 10 other P. teres spp. isolates collected from across Australia. Modern genotype-by-sequencing markers were used to analyse the level of genetic diversity of the disease across the country. More-detailed analyses were also conducted in WA between agro-ecological zones, fields and host varieties,” Mr Hassett says.

As commercial barley lines have low levels of resistance to spot form of net blotch, it appears this has enabled unconstrained proliferation of the fungus with movement across Australia, likely aided by people and machinery agricultural activities.

“The results provide a foundation for improved spot form of net blotch disease management in Australia and suggest a nationally coordinated program will be prudent for effective disease control,” Mr Hassett says.

“However, developing an effective strategy is challenging, as populations with high genetic variability have greater potential for overcoming chemical and genetic controls.”

The next step for his project is to look for disease variability on different varieties of barley lines (pathotyping).

Mr Hassett is 18 months into his study and is excited about the discovery aspect of the work he is doing for the grains industry. Once completed, he would like to continue in plant pathogen and cereal crop research.

This article was adapted from GRDC Ground Cover Supplement: Grains research – the next generation, November-December 2021